Lost in a Spotless Mind

(image source, edited by me)

This belongs somewhere in the book I’m writing, probably about a third of the way in.  The whole thing is nowhere near ready — we’re talking years, not months away — but I wanted to give you a tiny little taste nonetheless. I hope you like it. Oh, and just a small reminder: you can subscribe to my blog via e-mail here.

“Death was tired?” Eira was, too, but she could smell a story.

“Well, yes.” Os stretched out and folded his hands behind his head. “Just imagine, people kept dying and dying, and everyone was carrying a life’s worth of memories and regrets and unfulfilled dreams and… heavy things. Death couldn’t let them keep all that forever, it would be cruel. But Death couldn’t shoulder everything itself either; it’s just too much for one. So Death made the Two, and gave them one half of the world each. They travel ahead of Death, picking up our burdens so we can travel on freely.”

“Patience, remember?” Os teased, nudging her arm with his foot. “Naturally, Death’s new system wasn’t perfect. Even split in half, nobody can carry a world’s burdens forever. So, once a year, the Two meet up with Death, fall asleep, and while they dream, Death makes them forget everything. All the bad stuff goes poof, and that way they can carry on for another year.” He cleared his throat and started singing, voice accompanied by the night wind swooping through the trees:

Os was quiet for so long that Eira had to open her eyes to check he hadn’t sung himself to sleep. “Os?”

“The bonds are our way of paying Death back for its kindness. Inside each locket is a sheet of gold leaf, which they use to cover our lips when we’re dead. That way, we can thank Death with a golden kiss.”

“Your Death does a lot of kissing.”

“It has a pretty hard job, after all, so there ought to be some benefits, don’t you think? Though the Two in the glen aren’t as lucky.”

“They get to forget.” Eira’s hands were almost fists, but she breathed them open again. Os didn’t comment on it, but she knew he’d caught the touch of envy in her voice.

“I want to remember everything,” he finally said, unusually serious.

© Maria Hansen Troøyen 2016. Do not republish without permission. 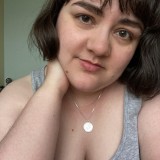 Do you see me now?

Of course it hurts

Theme by Anders Norén — Up ↑