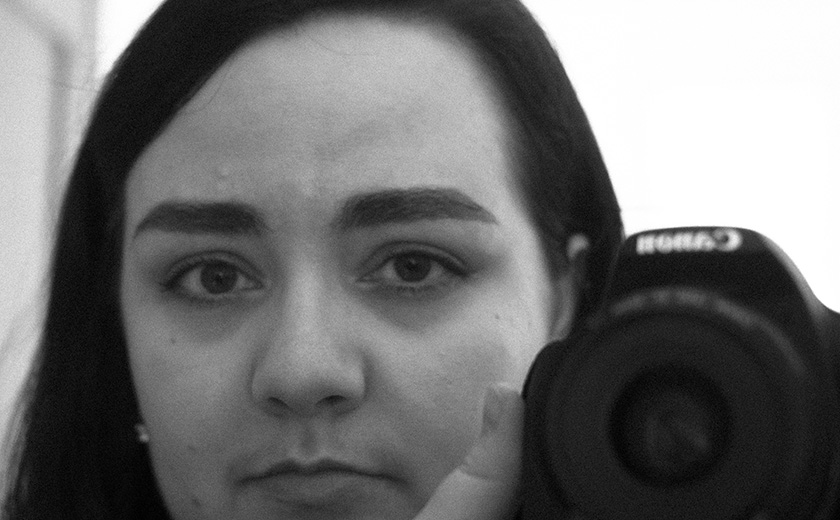 Image description: A grainy, black and white photo of Maria. She’s a white woman with dark hair and dark eyes. She’s holding a camera up by her face, taking the picture in a mirror.

I wanted to write something about acknowledgement, especially the importance of acknowledging other people, and of being acknowledged yourself. It’s not something we talk about a lot, perhaps because it sounds so serious, but I think most of us know the feeling. It’s like… like when you’re talking to someone, and you can tell they’re truly listening. When the cashier at the grocery store says “have a good day”, and it looks like they actually, magically mean it. It’s when you’re sleeping next to someone, and they pull you closer, without even waking up.

1. accept or admit the existence or truth of.

2. recognize the importance or quality of.

3. express gratitude for or appreciation of.

4. accept the validity or legitimacy of.

5. show that one has noticed or recognized (someone)

When you look up “acknowledgement” in a dictionary, you find some pretty strong words. Acceptance. Importance. Gratitude. To recognise, to notice, to confirm. The real beauty lies in how acknowledgement creates connection. To truly acknowledge someone, to accept and appreciate them, and then reflect these feelings back, you have to first see them. And being seen is an extremely powerful thing. Unfortunately, so is not being seen.

Say you’re in a bar, hanging out with a couple of friends, and someone they know comes over to say hi. That person doesn’t look at you, even though you’re sitting at the same table. They don’t introduce themselves. They talk about people and events you don’t know. So you’re stuck there (because of course you have the chair in the inner corner), trying to simultaneously be politely interested, but also like you’re in your own little world and don’t mind at all being left out, in fact you hardly noticed it happening… except you did notice, didn’t you? Still, that was a random stranger. You can shake it off.

Kiss me, and you will see how important I am.

Then you fall in love. Somehow, inexplicably, they seem to like you back, and there are flirty texts at 2am. Internal jokes about odd things like a certain hand movement, or jam. There’s tiny, secret touches, then naked, salty skin. But then those secret touches stay secretive, and it’s like hitting an invisible wall — this far, honey, but not further. I’ve been there many times myself: the girl they want, but not completely, not everywhere. It’s a shitty feeling, because it’s a half-love without that real acknowledgement of I see you, all those things you are, and I’m proud of them.

There are smaller incidents, too, of course. Like the silent treatment, which is basically a way of consciously not acknowledging another person. Or someone not holding a door open for you when they know you’re right behind them (this is why I think manners matter, but that’s a whole other blog post).

I would hold a door for anyone. It has to do with noticing our fellow human beings and saying, “I recognize that you’re on this planet, and I don’t want a door hitting you in the face.”

Acknowledgement is also a form of respect, which is why it’s so tightly connected to issues concerning gender, race, economy, education, and who you love. Just consider the simple act of being heard. Whose voices are loudest? Whose stories are told, in books and movies and interviews and games? Who do we pay attention to when they speak? Who do we believe? I think true acknowledgement requires something of an open mind. You don’t have to fully agree with someone’s opinions and choices, only respect them enough to act like they’re a human being, too. It’s empathy in its most basic form.

So you want to get better at this acknowledging-thing, this small way of making the world a little bit better, a little bit kinder. But how? I’m afraid it’s both very simple, and quite hard: you’ll have to pay attention. It starts there, with noticing people around you, what they say and what they do and what they look like. Then, with your eyes open, you simply let them know that you see them. You might say something, like “I’m glad you exist” (which might be my favourite compliment, both to give and to receive), or “you look happy today”. You could nod to your neighbour, even though it’s awkward because you’ve been sort-of-ignoring each other for months out of big-city-politeness. You can act on that impulse to kiss your might-be-your-girl on the cheek while you’re riding the tram together. Be polite to the waiter. Let someone else talk this time.

Or, you could do something so simple as to ask a question. What have you done today? Do you miss your grandmother? Would you like it if I held your hand? They’re strange things, questions. You never know where they might lead.

Written by Maria Hansen Troøyen (pronouns she/her), a Norwegian woman in her thirties.